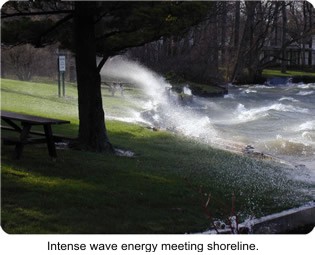 This page will help to explain some of the erosion problems you may have and suggests various ideas to fix those problems.

The shoreline of many lakes is constantly being bombarded by wave or ice movement, which grinds and displaces soil particles. This sedimentation, the settling of suspended particles, changes the lake ecosystem by covering plants and bottom habitat required for fish feeding and spawning. Sedimentation also carries nutrients and other pollutants that may be attached to the soil.

Erosion of soil into a lake also causes the water to become turbid, or cloudy. Loss of water clarity makes feeding difficult for fish and wildlife species that rely on sight for pursuing their prey.

Many property owners on developed shorelines have replaced native shoreline plants with turfgrass, which has a shorter root system. The short roots of the turf provide less protection against erosion and make the shoreline area more susceptible to wave and ice action.

There are three different groups of factors that cause erosion: terrestrial forces, aquatic forces and human activities. 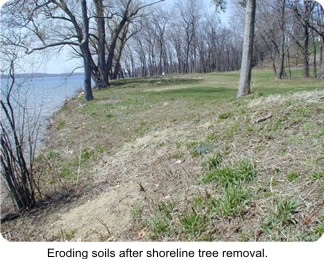